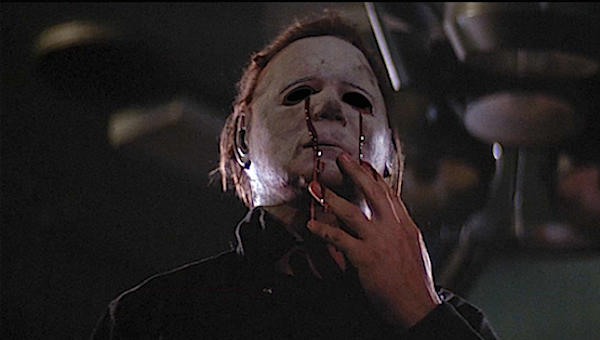 There are 11 movies now in the Halloween franchise, with a 12th on the way next year. Within those there are 5 possible timelines, maybe more? I’m not joking! This puts science fiction to shame as regards plotting complexity and contrivances! Regardless here we look at Halloween 2 or Halloween 2 (1981), the original sequel to the original ’78 classic. This is basically “More of the night he came home” to use its own tagline, following on literally minutes after Dr. Loomis shoots Michael Myers out the window and over the balcony. He is not dead, of course and from the start of the movie we learn that he follows Laurie Strode to Haddonfield Memorial Hospital where she is being treated for her ordeals and injuries from the events of earlier (the 1st movie).

After the huge success of “Halloween”, original creator John Carpenter was coaxed into writing a second movie, despite much objection. He has admitted many times since that there was nowhere for the story to go, that he wrote it late at night with the help of alcohol and that it shouldn’t really have existed at all. Possibly one of the biggest ideas or reveals within the movie is that Laurie is actually Michaels sister (again John Carpenter threw this in towards the end because he was struggling to find any logical place for the story to go), and this idea is what drove the franchise forward over the 15 or so years that followed right up to the conclusion of the “Thorn timeline” in Halloween 6. Of course the brand new timeline, beginning in 2018 dropped this idea entirely and even made an in movie joke about it where they address circulating rumours of Michael and Lauries possible family connection and rubbish it as false or myth!

Interestingly the movie employs much of what the original 78 movie went on to influence. By the late 70’s, early 80’s, Halloween had inspired a slew of cheaper copycats including most famously Friday the 13th. Halloween 2 as a result is a much nastier, more shlocky type of affair in line with the knock offs that surrounded it at the theatres and drive ins. Again, and much to director Rick Rosenthals dismay, this was John Carpenters idea to come back to the movie and up the shock and gore factor in order to keep up with the competition, after seeing a rough cut of the movie. As a result, and if watched back to back with the original, Halloween 2 is quite jarring in its changes and its insistence on blood rather than suspense. It’s difficult to know whether this was the right decision in the long term, the movie to this day being a much argued and divisive one. It has some merit and a certain style for sure, but the growing cult status of the Myer-less Halloween 3 that followed has left it almost in limbo. Michael Myers of course would return in Halloween 4, in my opinion one of the strongest in the franchise, 2nd only to the original classic.